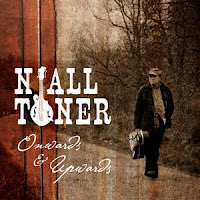 
Pinecastle Records, one of the leading US bluegrass record companies, today released Onwards & upwards, the new album by Niall Toner - his first on the Pinecastle label. The ample album notes include the author's own accounts of writing each song as well as photographs from the studio sessions. The Pinecastle press release includes the information that

... For months Toner's AirPlay Direct profile occupied the #1 spot on the service's all-time bluegrass album chart, and is currently #3.

Posted by bruffbluegrass at 2:00 PM