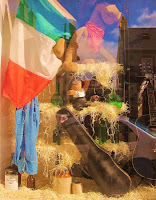 Put it in your Diary Friday 4th October Bruff Co. Limerick
Exciting news about the fifth festival, to be held this year on 4-6 October.

Bands already confirmed as taking part are (in alphabetical order): Bending the Strings, the Down and Out Bluegrass Band, the Knotty Pine String Band, the Tennessee Hennessees, and Woodbine. Five more bands (yes, you read that correctly) are still to be confirmed; and if the possibilities now in view are realised, it will be a momentous weekend.

As well as musical extras that are being considered for the schedule, Bruff has always made a point of laying on some good country-style events, which this year will include the Horse-shoe Pitching Contest, the Donkey Derby, and the Morning Star Rose Competition (named for Bruff's river).
Posted by bruffbluegrass at 12:01 PM